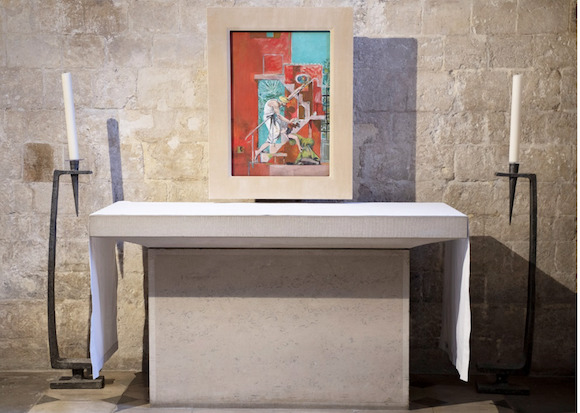 2021 marks the 60th anniversary of Graham Sutherland's painting Noli Me Tangere which is displayed on the altar of the Mary Magdalene Chapel in the south-eastern corner of Chichester Cathedral.

The painting depicts the moment when Mary Magdalene discovers the tomb of Christ lying empty and on encountering Christ resurrected, mistakes him for a gardener. Not just a significant piece of modern art, the painting is important symbolically as it portrays the first realisation by a mortal that Christ had indeed risen from the dead.

Noli Me Tangere (Touch me not) was commissioned by Walter Hussey when he was Dean of Chichester Cathedral. Dean Hussey is known for commissioning contemporary artists to create work for the Church: during his time as Dean from 1955 to 1977, he also commissioned a tapestry by John Piper, a set of copes by Ceri Richards, a stained-glass window by Marc Chagall, as well as furnishings by Geoffrey Clarke.

Graham Sutherland (1903-1980) completed the painting in 1961. It illustrates the moment described in St John's gospel, chapter 20, verses 14 to 17. On the first day of the week after Jesus' crucifixion, Mary Magdalene was standing outside his empty tomb weeping when she saw Jesus standing there. Mistaking Jesus for the gardener, she asked him where they had put the body, and it was only when Jesus spoke that she realised who he was. Jesus' reply was "don't cling to me, because I have not yet gone up to the Father". In Latin, the first part of this reply became "Noli me tangere", and this is the moment Sutherland has illustrated.

Sutherland's painting is full of symbolism: for example, it is asymmetrical, allowing the perpendicular meeting of the diagonal handrail and second level of the staircase to form a transverse cross. Jesus' figure stands upon this construction, his body creating a strong diagonal line pointing upwards, but his gaze and gentle, yet firm, gesture downward emphasising the tension between the two figures.

Sutherland actually created two versions of this painting, the other is in Chichester's Pallant House Gallery. To mark the 60th anniversary of this extraordinary work, The Chancellor of Chichester Cathedral, The Reverend Canon Daniel Inman and Director of Pallant House Gallery Simon Martin will be exploring the painting's significance and symbolism in an online talk, delivered via Zoom, on 22nd April 2021.

"Graham Sutherland's Noli Me Tangere is one of the most evocative pieces of modern religious painting in twentieth-century Britain, which has been a focus of devotion and inspiration for many who have come to Chichester Cathedral over the past sixty years. I am hugely looking forward to hearing Simon's reflections and being part of a wider conversation about how Sutherland invites us to interpret one of the most intimate of scenes in the whole Bible."

"Walter Hussey was a visionary patron of the arts for the Church of England and the donor of Pallant House Gallery's founding collection. It therefore gives me great pleasure to be taking part in this event to mark the 60th anniversary of the commissioning and creation of this remarkable painting by Graham Sutherland who is one of the key figures in Modern British art."

Further details on the artwork, and the upcoming talk, can be found online:www.chichestercathedral.org.uk / www.pallant.org.uk.